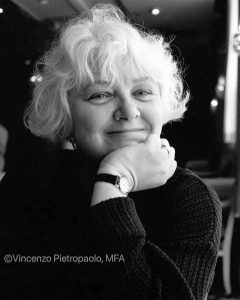 Kincardine poet and playwright, Catherine Macleod left us on Women’s Day (March 8, 2021), just as the Huron sunset faded into night.
“Renee” was born on a spring day, June 10, 1948, in Glasgow, Scotland.
In the 1950s, Catherine immigrated to Canada with her mother Catherine, her father Robert, her sister Janis and her brother Robert. Catherine’s poetry was heavily influenced by her experiences as a working class, Scottish immigrant. As a young woman, she left Kincardine for Toronto and the Yorkville hippy scene. There she discovered Leonard Cohen, Judy Collins, Bob Dylan and Joanie Mitchell, and found her own voice as a feminist, socialist and artist.
Her poems reflected her experiences as a feminist, mother, artist and proud working-class woman. Catherine published two books of poetry: “Lessons Never Learned” and “The Telling Time”, and completed a third volume entitled “Relate”. She was the author of three plays: “Glow Boys”, “Pandora” and “Ferns”. Catherine’s autobiography, entitled “Waking Up in the Men’s Room: A Memoir”, was published in 1998. She co-wrote “Grass Scapes: Gardening with Ornamental Grasses” with her husband Martin Quinn, and edited “The Kincardine Scottish Pipe Band: The First Century” with author Basil McCarthy.
In 1997, Catherine received the Ontario Federation of Labour Arts and Culture Award. Her poem “Lilacs” was nominated for the 2004 Canadian National Magazine Award for poetry; that same year, Catherine was honoured with the Woman of Distinction Award for Grey and Bruce counties.
Catherine was a founding member of the Women’s Press and the Mayworks Festival of Arts and Labour. She worked for many years as a communications specialist in the Toronto labour movement and helped establish the Ontario Federation of Labour’s Cultural Award. After her retirement, Catherine pursued her love of Canadian history at Western University and earned her Master’s degree.
In 1992, Catherine left Toronto and returned home to Kincardine to marry her high school sweetheart, Martin Quinn. Catherine considered it the best decision she ever made and everyone who knew them agreed. In the final years of her life, Catherine was very ill and Martin cared for her beautifully until the end.
Catherine shared her sharp Macleod sense of humour with her son Grayson, whom she loved dearly, and she was very proud of her grandsons Keahan and Casey. Catherine was an adopted mother to Katheryne Schulz and a loving mother-in-law to Janet Teibo, both of whom will miss her terribly. She had a loving relationship with her stepson Joe Quinn and his wife Joanna.
Catherine loved her sister Janis Shewfelt and her niece Taryn Kraft (Dan); her brother Robert Macleod, his wife Sue, and their children Robbie (Sita), Joel (Candice) and Greg (Sarah). She appreciated the love and support of her in-laws: Nancy and Tim Potter, and their children Christopher (Katelyn) and Natalie; Helen and Mike Riggin; Judy and Dale Baer, and their children Angela Tolton (Paul), Sara Davies (Chanse) and Robert Tolton (Cara Beth); and her niece Olivia Freer (Dustin).
Catherine wanted to live with grace and to die with dignity, and she managed to do both. “Hold fast,” she told us. And we are trying, but nothing will ever be the same without her.
A celebration of her life will be held at a later date when Catherine’s loved ones can mourn together in person.
In lieu of flowers, please send your donation to the Women’s House Serving Bruce and Grey (Kincardine), or the Huron Women’s Shelter (Goderich).
Portrait and memorial available online at www.daveylinklaterfuneralhome.com.