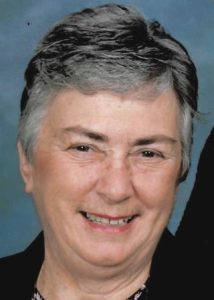 Shirley Marie Boyd (née Engel) of Point Clark passed away at the South Bruce Grey Health Centre – Kincardine on Wednesday, Nov. 2, 2022, in her 92nd year.
She is survived by son Randy (Val) Boyd of Guelph, daughter Patti (Don) Adair of Tiverton and son Rick (Marion) Boyd of Toronto.
Beloved grandmother of Matthew (Natalie), Michelle, Michael (Leona), Sam (Teresa), Lauren, Jennifer and Jillian and great-grandmother of Eleanor.
Also survived by her brother Ross Engel and sister Betty (Gary) Capling, sisters-in-law and brothers-in-law Caroline Yundt, Larry (Jane) Boyd, Marie Boyd and Bob Mueller.
Shirley was predeceased by her husband Bill of 69 years in 2021; parents Elsie and Norman Engel; Bill’s parents John and Winnifred Boyd; sister Judy Mitchell, brother Ken Engel and sisters-in-law and brothers-in-law Jack (Lois), Jim (Jean), Pat Boyd and Ron Yundt.
Shirley and Bill owned a Massey Ferguson farm machinery dealership in Listowel for 25 years. They purchased a family cottage in Point Clark in 1964 and retired there full-time in 1991.
Shirley was an active member of the Kinette Club of Listowel and an avid curler. In retirement, Shirley and Bill wintered in Florida for many years. They were both very involved in the Point Clark Boat Club and Lake Huron fishing derby. Shirley and Bill were also members of the Pine River United Church.
Their home in Point Clark was the center of many gatherings with family and friends. Many special occasions were celebrated there, and Shirley made sure no one left hungry. In quieter times, she enjoyed playing cards, reading and watching curling and her favourite sports teams on TV. Shirley will be missed by many friends and family.
Service details to follow.
Cremation has taken place.
Interment at the Pine River Cemetery will be held at a later date.
In lieu of flowers, the family would encourage donations to the South Bruce Grey Health Centre or to a charity of your choice as expressions of sympathy, which can be arranged online or by contacting the Davey-Linklater Funeral Home (757 Princes Street, Kincardine ON N2Z 1Z5; 519-396-2701; daveylinklaterfh@tnt21.com).
Portrait and memorial available online at www.daveylinklaterfuneralhome.com.