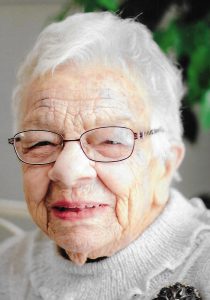 Sara Josina Van Dam (née Mulder) of Tiverton passed away peacefully in her home on July 22, 2021, in her 103rd year.
Beloved wife of the late Willem Van Dam, who predeceased her on May 28, 2011.
Dear mother of Martin Van Dam (Pat Zehr), of Waterloo; William Van Dam, of Inverhuron; and Harry Van Dam (Jane), of Kincardine.
Cherished grandmother of James (Lisa) Van Dam, of Victoria, BC; David Van Dam (Jodi), of Guelph; Steven Van Dam (Christine), of Guelph; Anna Stafford, of Nova Scotia; Kimberly (Dan) Plante, of Saskatchewan; Jill (Ryan) Fraser, of Kincardine; and Heather Van Dam, of Kincardine.
Great-grandmother of Jacob and Sarah; Noah and Luke; Jack, Charlie and Max; Sara, Pauline, Bryan, Keianna and Josina; Genevieve and Adriel; Briley and Myles; and Mya.
Predeceased by her three brothers: David, Adriaan and Dick Mulder and by her three sisters: Nel (Schuyt), Cornelia (Bonker) and Janneke (Van Midden).
Sara was born in Zaandam (Netherlands) on March 8, 1919. She was the second eldest daughter of Johannes Martinus and Ana Cornelia Mulder (née Spaander).
She married Willem Van Dam in 1944 and emigrated to Canada in 1954 with their three children. Emigrating to Canada was difficult for her at that time as she thought that she would never see her immediate family again. After residing in Etobicoke for several weeks, the family moved to Walkerton in time to experience Hurricane Hazel.
Sara self-educated herself in English using reading and spelling books from her children. She worked as a secretary for several automotive dealerships and finally as secretary to the head health nurse at the Walkerton Health Unit. In 1970, they moved to Inverhuron, while she continued commuting to work in Walkerton. Winters were more severe, and the road to their home in Inverhuron was not plowed. When driving through the deepening snow became impossible, they walked the two kilometres to their home, bringing their food and water on a sled.
Sara enjoyed sewing, embroidery and petit point, making many fine pieces of artwork during her lifetime. She was fanatical about her physical well-being, enjoying exercise, swimming classes and walking groups. When the park in Florida was without an activity director, she filled in and led the swimming classes and exercise groups until they stopped going to Florida when she was 90 years of age. Back at Inverhuron, she started walking groups, which turned into social events at the beach store with coffee before returning back home.
Sara moved into Tiverton Park Manor in 2009 and made many good friends.
She died peacefully with her family and friends at her bedside.
She will be sadly missed.
A private family interment will be held at The Tiverton Cemetery.
To leave an online condolence or make a donation, please visit www.mackenzieandmccreath.com.
Arrangements entrusted to MacKenzie & McCreath Funeral Home, 12 Queen Street, Box 248, Ripley, Ont. N0G 2R0; 519-395-2969.