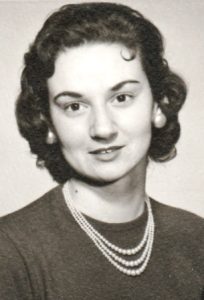 Pauline “Rita” Springford passed away unexpectedly at home in Kincardine on Nov. 13, 2022, at the age of 85.
Beloved wife of Larry.
Proud and loving mother of Lisa (Doug), David and Katherine (Mike).
Cherished grandmother of Richard (Haley), Elizabeth, Patricia (AJ) and Aidan. Great-grandmother of Theo, Evelyn and Xander.
Survived by her siblings Bert Lambert (Theresa), Margaret Smith (the late Fred), Doreen Furst (the late Max), Theresa Hanske (the late Rudolf), Ernestine Turcotte (the late Gerry) and Sylvia Message (the late Hugh).
Predeceased by her parents Ernest and Madeline Lambert, and her siblings Rosemarie Egli (the late John) and Beatrice Finucan (John).
Born into the middle of a large family, Rita and her siblings were adventurous children who climbed trees and jumped off the roof of the chicken coop, among other activities. When she started working, Rita quickly became the head teller at the largest branch in Kingston. She met and married Larry, a young officer, and their military adventure continued for more than 20 years. As a young wife, Rita quickly discovered that marriage to a military man was very different from her upbringing. As time progressed, she accepted her role as a senior officer’s wife. Life as a military spouse included 12 moves that Rita coordinated along with the corresponding 12 households that she commanded efficiently. Living in Germany for three years provided the opportunity to travel and ski throughout Europe, which whetted their taste to see more.
After so much movement, Rita and Larry settled down in Kincardine for the last 40 years. They didn’t stop travelling but continued to explore the world and visited Australia, New Zealand, Central America, Macchu Pichu, the Galápagos Islands, France, Italy, Greece, Spain, Portugal and the United Kingdom. North American travel included Canada from coast to coast as well as the southwest and east coast of the U.S. Despite all the travelling, Rita frequently visited her parents, family members and elderly friends.
Rita’s other adventures included sailing (for a first and last time) and dragging a glider trailer behind the car until she decided to retire from that duty. She was an avid walker along the shore of Lake Huron and, when they started to winter in Arizona, on her favourite trail. At Rita’s instigation, they started square and round dancing, meeting many new friends in Kincardine and southern Arizona. Rita played Scrabble, did the Toronto Star word puzzles, sewed dance outfits and Halloween costumes, read historical fiction and enjoyed the Lake Huron sunsets.
Visitation will be held at the Davey-Linklater Funeral Home, 757 Princes Street, Kincardine from 7-8 p.m. on Thursday, Nov. 24, 2022. A Mass of Christian burial will take place at St. Anthony of Padua Roman Catholic Church, 749 Russel St, Kincardine at 11 a.m. on Friday, Nov. 25, 2022, with Father Thomas Manninezhath officiating. A reception will follow at the church.
Interment at a later date at St Mary’s Cemetery, Kingston.
In lieu of flowers, donations in Rita’s memory to the Alzheimer’s Society of Canada would be appreciated by Rita’s family.
Portrait and 0memorial available online at www.daveylinklaterfuneralhome.com.