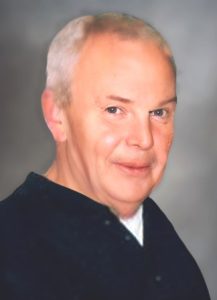 Peter George Keith Carver, of Kincardine, died Tuesday, June 28, 2022, at the South Bruce Grey Health Centre – Kincardine. He was in his 77th year.
Born Nov. 29, 1945, in Belleville, Ontario, he was the son of George and Flora (née Keith) Carver.
Peter married Mary Helen (née Smith) of Amherstburg in July of 1967.
Besides his wife, Peter is survived by two children: Murray (Denyce) Carver and Esther (Shawn) Wilson; four beloved grandchildren: Daniel Peter Carver, Mary Grace Carver, Noah Peter Wilson and Edie Evelyn Wilson.
After attending elementary and high school in Belleville, Peter earned a B.A. in History from Queen’s University and started his teaching career at the Kincardine District High School in 1966. He taught in Windsor from 1967 to 1970 and in Pennant Hills, Australia in 1970-1971. He returned to the Kincardine school in 1971, and taught there until his retirement in 2001.
Peter was a respected and much-loved teacher. One of the highlights of his senior history students was the annual class trip by bus to Boston or Washington.
He was a big-hearted man who made friends wherever he went. Peter had a wry sense of humour and could spin a good yarn. He was full of sports trivia and enjoyed organizing trips to professional sports games – likely because he grew up attending such events with his father who was the long-time sports editor of the Belleville Intelligencer.
Cremation has taken place.
A celebration of his life (drop-in) will be held Saturday, Aug. 20, 2022 from 1 to 4 p.m. at the Royal Canadian Legion – Branch 183, Kincardine.
In lieu of flowers, memorial donations can be made to the Kincardine and Community Health Care Foundation or a charity of your choice.
Portrait and memorial available online at www.daveylinklaterfuneralhome.com.