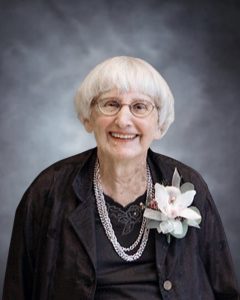 Margaret “Monica” Gilbert, of Kincardine, born January 13, 1935 in Montreal, passed away peacefully at the South Bruce Grey Hospital – Kincardine, on Sunday, February 16, 2020 in her 86th year.

Loving wife of the late William “Stewart” Gilbert, whom she married on August 29, 1959 in Montreal.

Throughout her life Monica worked as a secretary at the Royal Bank of Canada head office in Montreal and as a registered nurse in several Montreal hospitals, after having graduated in 1958 from the Montreal General Hospital. She and Stewart arrived in Kincardine from Deep River on November 1, 1968 during a blizzard. They quickly became used to that kind of weather. In Kincardine she worked as a book seller at Books & RDT and That Little Book Shop, where she enjoyed the thrill of being surrounded by books.

“I would like to thank my wonderful friends for everything – help, animals, much laughter, good food and even some tears. You have been terrific!”

As per Monica’s wishes, no funeral arrangements have been made.

In lieu of flowers, memorial donations to the Kincardine Community Services Association (e.g., Good Food Box, Christmas Hamper Program), Doctors Without Borders or Sleeping Children Around the World would be appreciated as expressions of sympathy.

Portrait and memorial online at www.daveylinklaterfuneralhome.com