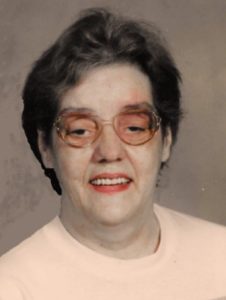 Marion (MacLennan) McGee, passed away at Pinecrest Manor in Lucknow, on Thursday, Jan. 12, 2023, at the age of 81.
She was born on May 11, 1941 in Kincardine hospital, a daughter of the late Emile & Rhetta MacLennan.
Beloved wife of Eugene McGee, of Goderich.
Also survived by her sister Margaret Morton of Point Clark and by many nieces and nephews. Predeceased by seven brothers: Rod, Eldon, Donald, George, Finlay, Jack and Sandy and two sisters: Louise Miller and Florence MacLennan.
A graveside service was held on Friday, Jan. 20, 2023 at 1 p.m. at the Christ Church Cemetery in Port Albert, with Pastor Dianna Boland officiating.
Marion’s family would like to thank their friends and neighbours for the phone calls, visits and food brought to the house after Marion’s passing. Thanks to the staff at MacKenzie & McCreath Funeral Home for their support and compassion and those at Pinecrest Nursing Home for their care of Marion over the last two years. Memorial donations to a charity of choice were also greatly appreciated as expressions of sympathy.
Condolences may be made online at www.mackenzieandmccreath.com.