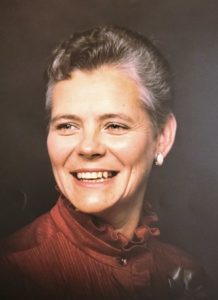 Marilyn Joan “Smokey” McFadden (née Needham), of Goderich and formerly of Kincardine, passed away at the Alexandra Marine and General Hospital in Goderich, on Thursday, Oct. 21, 2021, in her 85th year.
Cherished wife of the late Keith McFadden (May 13, 2017).
Loving mother of Debra Reid of Goderich and Shelley Neale of Victoria, BC
Missed by her seven grandchildren and seven great-grandchildren.
Dear sister-in-law of Bruce McFadden of Port Huron, USA; and Madeline McCaw of Sarnia.
Fondly remembered by her son-in-law Kevin Johnston and by many nieces, nephews, cousins and friends.
She was predeceased by her daughter Kim Johnston and by her parents, Sam and Dorothy (née Keen) Needham.
Private family arrangements have been entrusted to the Davey-Linklater Funeral Home (757 Princes Street, Kincardine ON N2Z 1Z5; 519-396-2701).
Final resting place: Resurrection Cemetery, Sarnia.
Memorial donations to the Kincardine Royal Canadian Legion – Br.183 (Poppy Fund) would be appreciated as expressions of sympathy.
Portrait and memorial available online at www.daveylinklaterfuneralhome.com.