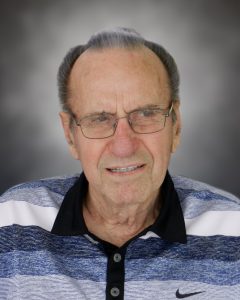 Robert Irving Reid of London and formerly of Kincardine passed away peacefully, with his family by his side, at McCormick Home in London on Saturday, Dec. 19, 2020, in his 93rd year.
Cherished husband of Ruth Jackson.
Loving father of Terry (Marlene) and Kevin (Sandra), all of Kincardine.
Dearly missed by his grandchildren and great-grandchildren: Nick, Nicole and Cullen Reid; Troy, Laura, Elena and Henry Reid; Victoria, Ian, Abigail and Madison Wallace; and Michael, Ashley, Cooper and Ella Reid.
Irving will be fondly remembered by his nieces, nephews, cousins, extended family and friends.
Irving was born in Kincardine Township on Jan. 14, 1928, to Robert and Ella (Shipley) Reid.
He had many careers over the years, including fuel delivery for C.E. MacTavish, and was promoted to driving the bulk tanker truck. He was an insurance agent for Prudential Insurance and later was employed by Ontario Hydro. He retired in 1993.
Irving married Vyetta Phillips in 1949 in Whitechurch. They were the proud parents of their boys Terry and Kevin. Over the years, Vy and Irving took up residence in Lucknow, Wingham and Kincardine.
Irving had an extreme love of camping throughout his years, with the comfort of a few trailers and motor homes. There wasn’t a car that he didn’t show an interest in, including Model T’s and his Corvair. He was a natural musician who loved to play the piano, organ, guitar, mouth organ and saxophone (which he played by ear). Many Saturday evenings were enjoyed at the St. Augustine Hall dancing the nights away with Vy. Vyetta passed away in 1993.
In 1995, Irving married Margaret Dixon and lived in Kincardine. They thoroughly enjoyed travelling throughout Canada and the United States. Irving was welcomed into her family by Margaret’s sons Orville (Gail) and their children Kim and Kelly; and Don (Gloria) and their son Darryl. They enjoyed an active 13 years together before her passing in 2008.
In 2010, Irving married Ruth Jackson, moving to London where they continued with his love of camping and her introduction to it. Ruth and Irving spent time going for long drives, eating out, returning to Kincardine for the Saturday night pipe band and visiting family and friends.
Irving was predeceased by his brothers and sisters: Norvel, Clarence, John, infant brother James, Marjorie Helm Rouse, Edna Young and Florence Harkness.

Visitation was held at the Davey-Linklater Funeral Home in Kincardine on Tuesday, Dec. 22, 2020, beginning at 1p.m.. A private family service will be held on Wednesday, Dec. 23, 2020.

In lieu of flowers, the family wishes memorial donations be made to the McCormick Home Foundation – London or the Alzheimer’s Society of London. Portrait and memorial available online at www.daveylinklaterfuneralhome.com.

Special thanks to the staff of McCormick Home for their kind and caring support of Irving.