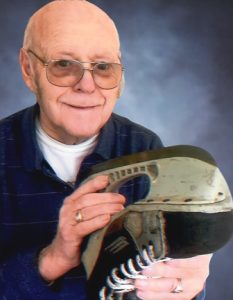 Albert Franklin “Frank” Pearce of Kincardine passed away peacefully and surrounded by the love of family at Trillium Court in Kincardine on Tuesday, July 5, 2022, in his 89th year.
Beloved husband of the late Mary Pearce (née Arnold) (2006).
Loving father of Paul Pearce and Jacquie Pearce-Taylor, both of Kincardine.
Missed by his grandchildren Sam Pearce, Brianne Réaume and Pearce Taylor.
Fondly remembered by his companion, Elaine Thacker of Kincardine; sister Mary Bell of Cadillac, Michigan; sister-in-law Shirley Arnold of Stratford and by several nieces and nephews.
Predeceased by his parents Percy and Iva (née McGee) Pearce, son Peter, twin daughters Marilyn and Maureen, brother Jack Pearce (Ruth), sisters Eunice Pearce and Shirley MacDougall (Ivan) and in-laws Doug Bell; Ed, Oscar, Eldon and Gib Arnold.
Frank operated a custom skate sharpening business for nearly 50 years. Generations of skaters travelled from many surrounding townships over the decades to have Frank sharpen their skates. He had a passion for woodworking and created many hand-crafted carvings for local furniture manufacturers. In his later years, Frank and some of his buddies started a lawn care and hedge trimming business; this group was known for their unique teamwork and techniques. An active member of his community, Frank gave of his time to coach sports teams and volunteer with many organizations and functions.
A celebration to honour Frank’s life will be held at the Royal Canadian Legion – Branch 183, Kincardine from 3-6 p.m. on Saturday, July 30, 2022.
Final resting place: Kincardine Cemetery.
Memorial donations to the Kincardine and Community Health Care Foundation would be appreciated as expressions of sympathy.
Portrait and memorial available online at www.daveylinklaterfuneralhome.com.