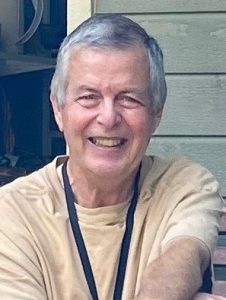 It is with deep sadness that we announce the passing of Andy Yemen on Friday, July 22, 2022, at the age of 65. Andy left us suddenly. Though he had a debilitating illness, we expected he would go on forever…
He leaves behind his devoted wife Pamela (née Darlington), his sister Lynda (Rod McGillivray), his sister-in-law Peggy Barusta (Larry Sinclair) and many cherished cousins, friends and colleagues.
Predeceased by his parents, Matt and Eileen Yemen.
Andy grew up in Toronto (Etobicoke) and spent his summers at his beloved cottage in Inverhuron on Lake Huron. Throughout his career in merchandising, he made significant contributions to organizations such as Sears, Hockey Hall of Fame, Disney and the CN Tower as a consultant, manager and buyer of retail store operations for over 20 years. Andy was a man of many passions. He loved playing the piano, attending Shaw Festival, extensive gardening, and enjoying time with his golden retrievers. Andy and his family were members of the Royal York Road United Church, offering their volunteer expertise over the years.
Andy was the ultimate people person and formed close friendships with many he met. He loved life and it was infectious. He saw humour in everyday living, always had a funny anecdote, and generally endeared himself to young and old. As was his summer custom in the last few years, Andy was often out on his scooter in Mississauga or at Lake Huron, feeding biscuits to any interested dog and sharing local gossip with the neighbours.
Andy was diagnosed 17 years ago with a familial form of ALS. As many of his favourite activities became no longer possible, he never complained. Instead, Andy focused on what he had and what he could offer to others. He was a kind man, a generous man and an inspiration to all.
If desired, donations in memory of Andy can be made to the ALS Society of Canada, the Heart and Stroke Foundation or a charity of your choice. At Andy’s request, no funeral services will be held. Online condolences can be made at www.turnerporter.ca.