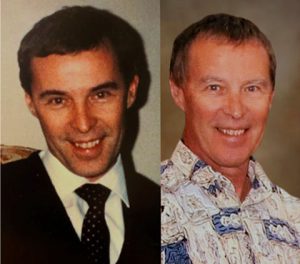 Richard “Dick” Joyce passed away peacefully at the South Bruce Grey Health Centre – Kincardine on May 17, 2021, at the age of 80.
He was a beloved husband and best friend to his wife of 42 years, Lyn (née O’Shaughnessy).
He will be greatly missed by his children: Sue Joyce (Cindy) and Steve Joyce (Ylva) of Sweden, and by his grandchildren Marcus and Nora, whom he adored.
Dick also leaves behind his loving sister Kathy Smith and nephew Kristan Smith.
He was predeceased by his parents, Milton and Helen (née Kolano) Joyce.
After graduating as a Chemical Engineer Technologist in 1963, Dick had a long and varied career, starting at Uni-Royal Corporation in Montreal and later moving to 3M Company in London, Ontario. In 1971, he began his relationship with the Bruce Nuclear Power Development, at the original Douglas Point Nuclear Generating Station, as a Radiation Control Technician. From there he moved to Bruce B as a Radiation Control Supervisor and then on to many different roles in emergency preparedness within Ontario Hydro’s Radiation Safety Program.
Upon retiring, he started his own consulting firm working with various municipalities to provide training and support for emergency workers. As a consultant, Dick also provided technical support for the Russian Federation RBMK Nuclear Power Program.
Dick was a lifelong passionate fisherman and outdoorsman, with several visits to favourite places such as northern Canada, the Caribbean, Florida Keys and the Queen Charlotte Islands. He also loved playing bridge. For several years he shared his knowledge as a scout leader and was often involved in the community. A real people person and problem solver, he was quick to offer help and support for anyone who needed it. He will be remembered for his gift-of-the-gab, his analytical mind and jovial spirit.
Sincerest thanks to the staff of SBGHC for their compassionate professionalism and support.
Cremation has taken place. Due to provincial restrictions, a private family ceremony will be held at a later date.
Portrait and memorial online at www.daveylinklaterfuneralhome.com.
Memorial donations to the Kincardine and Community Health Care Foundation, the Huron Shores Hospice or a charity of your choice would be greatly appreciated.