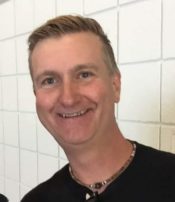 It is with sadness that we announce the passing of a creative and caring soul, William Baren Stewart, who passed away at his home in Hay Lakes, Alberta on May 18, 2021, in his 52nd year.
Son of William James & Nancy Stewart (Kirkconnell) of Kincardine and John & Mary Belle Roesgen (Hunter) of Sarnia.
Former spouse of Jacay Clegg.
The unrivaled father of Taylor (Walter Trzmiel), Landon (Shailynn Smith) and Caiti (Robert Forest).
Beloved brother of Tad (Sophia) and Brandon (Jason Michael).
He will be greatly missed by his extended family, including sibling-in-laws, aunts and uncles, nieces and nephews, cousins, and his life-long friends.
Baren was born and raised in the small town of Kincardine, off the shores of Lake Huron, where he spent his early years swimming competitively for the Kippers swim club. He could often be found swimming in the lake – especially from the harbour to the breakwall, where it would just be him and the seagulls.
Baren had the voice of an angel. He shone on the stage, performing in many musicals and singing contests (even winning a gold medal). Baren would often sing at funerals for family and friends, bringing tears to eyes and melting hearts while he sang Amazing Grace.
Later in life, after moving to Alberta, Baren met Jacay and they settled in the Village of Hay Lakes, raising three fantastic children. He would go on to join the Carpenters Union – Local 1325. Looking to serve his community, he joined the volunteer fire department, became a councillor, deputy mayor and then served two terms as mayor of Hay Lakes.
He was also instrumental in starting the Hay Lakes Community in Blooms. His love of nature and desire to always give back showed in the community. He volunteered and attended excursions for the Scout and Venture programs, assisting with canoe portage, making sure there was always wood for the fire on those blistering cold nights, and he always made sure every kid had a dry pair of socks.
Always forthright, he offered advice with a phrase for any situation (either big or small): “Well you better get your rider on the horse.” And that is what happened, they would just get on with the task to be done.
His former co-workers at American Bridge will surely miss Beaker’s infectious smile, big heart, and subtle humor.
The family sends a huge thank you to Corbett Geldart. We cannot express how grateful we are for everything you have done for us all; you were indeed a loyal friend. Special thanks also go to Baren’s life-long friends Tim Kelch and Sheri Campbell, both dedicated and caring beyond measure.
In keeping with Baren’s wishes, a private service was held for the immediate family on Sunday May 30, 2021. A celebration of life will be held as restrictions and time allow.
In lieu of flowers, memorial donations in Baren’s name would be graciously accepted by the Friends of The Hay Lakes Municipal Library (P.O. Box 69, Hay Lakes, Alberta, T0B 1W0) or by the Kincardine Kippers.