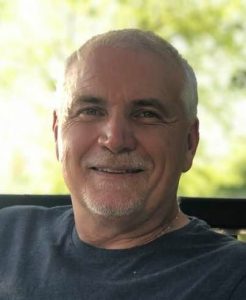 It is with profound sadness that the family of Thomas Lawson Kerr announce his peaceful passing, at his home in Kincardine on Wednesday, April 28, 2021, in his 59th year.

He will be lovingly remembered by his wife and best friend of 37 years, Lynn (Hamilton) Kerr, of Kincardine.
Proud and loving father of Tyler and Brenna Kerr, Andrew Kerr and friend Sarah Hollinger, and Katherine and Cody Newbigging. He was grandfather of Aria, Elena, Hayden and Charlotte.
Loved by his father James Kerr, of Listowel; mother-in-law Marsha (Beatty) Hamilton, of Listowel; his brothers and sisters-in-law John and Diane Kerr of Listowel, Allan and Leesa Kerr of Gorrie, Kevan and Johanna Kerr of Newmarket, and Urairat Kerr of Thailand; as well as by his many nephews and nieces.
Tom was predeceased by his brother Murray Kerr, mother Jean Anne (Doig) Kerr, and father-in-law Howard Hamilton.

Tom was born in Listowel, Ontario in 1962. He received his trade ticket in refrigeration from Mohawk College in Hamilton. He married the love his life in 1984, after three years of dating. Tom would go on to start his own business and have a thriving career for almost 40 years. He has been a well-known builder in both the North Perth and Kincardine communities, building many houses and apartment complexes.
He also had a strong community presence: serving as a former Wallace Ward Councillor, a former Kinsmen and K-40 member, and participated and donated to many local causes. Tom had many passions, including travelling around the world with his wife, flow riding and pickle ball.
Tom had many accomplishments during his career, but his greatest accomplishment was his family. His pride and joy were his grandchildren. He would always take time out of his hectic work day to see and play with his beautiful granddaughters. His family has and always will be his greatest legacy.

A private family funeral service will be held at Knox Presbyterian Church in Listowel at 11 a.m. on Friday, April 30, 2021, with Rev. Don McCallum officiating. Tom’s funeral will be live-streamed and the link will be available on the Eaton Funeral Home website at www.eatonfuneralhome.ca. We ask you to watch safely from home. Online condolences may also be made through the website.

Due to the impact that pancreatic cancer had on their lives, Tom’s family would appreciate memorial donations to the Baker Centre for Pancreatic Cancer at London Health Sciences Centre. Donations may be made through the Eaton Funeral Home (385 Main St W, Listowel ON N4W 1A4; 519-291-4840; eatonfh@gmail.com.)