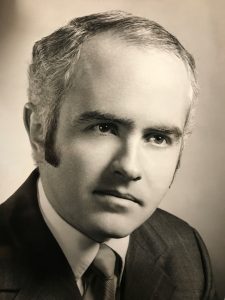 Edward Paul Rigby of Kincardine passed away at the South Bruce Grey Health Centre – Kincardine on Monday, Feb.1, 2021, at the age of 80.
Cherished husband of Jane (née Flatt) Rigby.
Paul will be missed by his siblings, John Rigby and Marian Furklo, and their families.
Remembered by his cousin Margot and family.
Predeceased by his parents Archdeacon Edward Rigby and Marjorie (née Worboy).
Paul grew up in Hamilton and was educated at Ridley College in St. Catharines. He received a Bachelor of Commerce from McMaster University and completed post-graduate studies at London School of Economics in London, England.
He began training to be a chartered accountant, but then left to join Canada’s Foreign Service as a Trade Commissioner in 1966. He served in Greece, Turkey, San Francisco, Peru and Bolivia.
Paul retired to form his own business, an international trading house performing purchase management for foreign projects and buyers and shipping worldwide. He also worked as an international sales representative for an industrial bearing manufacturer covering most of the globe, north and south. He was fluent in French, Spanish and could manage in Greek, Italian, Portuguese and Turkish.
Paul moved to Kincardine where he formed a small wholesale business. He also had a shop focusing on his wife’s ceramic art. He was active in the Kincardine Community Singers. While in Hamilton/Dundas, he became a senior active in Rotary. He continued his service for Kincardine, most notably running the Rotary Bingo.
He loved his many pets, and will be missed by his Border Collies, Skye and Polly.
Cremation has taken place.
Final resting place, in the spring, Grove Cemetery in Dundas.
Memorial donations to the Kincardine Rotary Club, Kincardine Community Singers or University of Guelph – Animal Cancer Centre would be appreciated as expressions of sympathy. Portrait and memorial online at www.daveylinklaterfuneralhome.com.