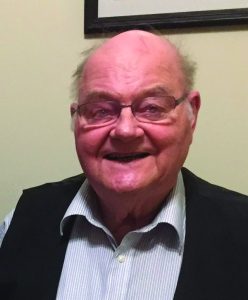 TEN KATE. Jan (John) Herman Catharinus died peacefully on March 21, 2022, in Kincardine, Ontario in his 91st year. Predeceased by his loving and caring wife Maria (Mary) Johanna (nee VanBussel). Loving father of Maria Riggin (Robin), Catharina Young, and Warner Ten Kate (deceased) (Sue Pinter). Dear Opa of Ben (Sarah), Daniel (Ashley) and Joel Riggin, Alex (Ashley), Ian and Graeme Young, and Rachael (Shawn) and Lauren Ten Kate (Dean). Dear brother of Dieuwke and Dino Ledeboer, and Godard and Monique Ten Kate. Dear brother-in-law of Wilma Van Bussel, Tina and Harry Van Boxmeer, Berny Van Bussel, Tony Smulders, Jim and Cathy Van Bussel, Elizabeth and Jeff Roestenberg, Helmi and John Kaufmann, Helen and Brian McHenry and Joe Czikk. He is also survived by many nieces, nephews and friends.
Predeceased by his parents, Harmina (nee Poppinga) and Warner Ten Kate, and granddaughters Christian Riggin and Laura Young. Predeceased by brother Warner Ten Kate and sister Gerrie Salome. Also predeceased by brothers-in-law Gerry Van Bussel, Gerry Hilhorst, Jack Van Bussel, Christian Van Bussel and Pieter Salome, sisters-in-law Pauline Ten Kate, Catherine Hilhorst, Joanne Smulders and Sharon Czikk.
John was born on Sept. 3, 1931 in Vollenhove, Overijssel, the Netherlands. He immigrated to Canada in 1954 and ended up in Lucan where he met and married Mary. They eventually moved to Dorchester where they raised their family. He loved playing music and writing orchestral arrangements. He was a member of the militia bands, Hussars and 3rd Royal Canadian Regiment. He had his own band, The Ambassadors, and led Dykehoppers band at the Dutch Canadian Club. He was an avid historian and a WWII buff. John was a wordsmith and right to the end of his life had a stack of dictionaries in English, Dutch, French and German beside his chair. He was entrepreneurial and co-owned a printing company with his son Warner.
There was a celebration of his life with his immediate family. Those wishing to make a donation in memory of John are asked to consider the Big Brothers and Big Sisters of Kincardine and District (https://kincardine.bigbrothersbigsisters.ca). MacKenzie & McCreath Funeral Home, Ripley entrusted with arrangements. Condolences may be made online by visiting www.mackenzieandmccreath.com