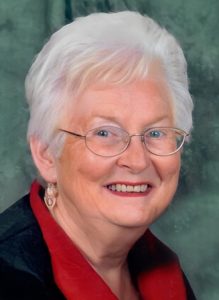 Irene Jeanette MacKinnon (née Wright) passed away peacefully, surrounded by family, at Grey-Bruce Health Services in Owen Sound on Tuesday Nov. 15, 2022, in her 87th year.
Beloved wife of Neil MacKinnon.
Loving mother of Linda Johnston (John) of Exeter, Douglas MacKinnon(Jocelyn Lesigues) of Toronto and Debra Gaudet of Tiverton. Cherished grandmother of Ashley Verriez (Brent), Ryan Johnston (Vanessa Kustec) and Stuart Gaudet. Adored by her great-granddaughters Paige, Brynne and Savannah.
Survived by her sister Rosaline Beattie, brother Bill (Sheila), all of Scotland; and Christine McNish (Allan) of Texas.
Predeceased by her brother George Wright, son-in-law Michael Gaudet and granddaughter Coral Rose Gaudet.
Born to George William and Agnes (Wilson) Wright in Dumfries, Scotland, Irene worked as a teenager in a theatre helping her family financially. Unbeknownst to her, her mother entered her photo in The Miss Dumfries contest, which she won. She was offered a modelling contract which she had to turn down because she had previously booked her passage to Canada with her brother George.
While working at a bank in Hamilton, on a blind date, she met Neil, the man she would marry. After the birth of their first child in the city, they moved to the family farm. She adapted to country life, learning many things – including cooking large meals for the help at haying and harvest, and learning to drive. While raising three children, she still found time to be part of the Agricultural Society and to be active at her church (where her Christmas cake was requested yearly to sell at the church’s Christmas cookie walk). She also attended the local high school and obtained her GED. She was very talented at cooking, baking and gardening and enjoyed bowling and shopping.
In her later years, she enjoyed the odd trip to the casino. Irene was cherished by her family for her kindness, thoughtfulness generosity, optimism and a sense of humour. She will forever be fondly remembered for her home baked treats, always on hand when visiting and always supplied even when she was told she didn’t need to bring anything. Having recently celebrated her 65th wedding anniversary, it was something she considered an accomplishment to be proud of and she very much enjoyed the ensuing celebration. A family visit at her house always ended with her standing at the doorway or by a window with a big wave and a smile. She will be greatly missed.
Visitation was held at the Tiverton Knox Presbyterian Church from 10-11 a.m. on Tuesday, Nov. 22, 2022, with the funeral service following at 11 a.m. (For the comfort of all those attending, visitors were asked to consider wearing a mask.)
Final resting place: Tiverton Cemetery.
Memorial donations to the Tiverton Knox Presbyterian Church would be appreciated as expressions of sympathy. Portrait and memorial available online at www.daveylinklaterfuneralhome.com.