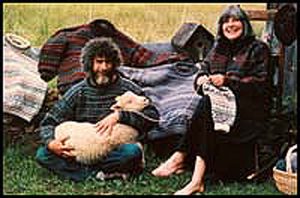 Eugene Bourgeois died on Sept. 16, 2020, at the age of 73.
He is survived by his brother Don Bourgeois (and his spouse Susan Campbell); his sister Judy Heikel (and her spouse Harv Heikel); and by children Cati Van Veen and her husband Tom Van Veen (and their children Jenna, married to Pat Bursey, and their children Isaac and Elena), Noah Van Veen, Annika Van Veen, Alexander Bourgeois (and his children Azalea and Aspen); and Stephanie Bourgeois and her partner Jason Hall.
Eugene and Ann (who died on May 11, 2020) established The Philosopher’s Wool Co. to do good. It is difficult to think of either Eugene or Ann without thinking of the other – they were a team, each bringing their own talents and enthusiasms to working with other farmers, artisans, environmentalists, and so many others. Philosopher’s Wool was not just about wool; it was about people.
Eugene grew up in Kitchener in a working-class family. He attended St. Jerome’s High School and became one of the first in the family to get a university education at University of Waterloo. But Eugene certainly went his own way, switching from mathematics to phenomenology – from which came the Philosopher. As he searched for his path, he met Ann and the path became much clearer.
That path led them to Inverhuron where they built a sheep farm. But that farm was much more than a place to raise sheep. From the sheep came wool and a thriving agri-business, with a focus on helping other farm families and growing an Ontario-based business – The Philosopher’s Wool and its many products. They travelled throughout North America and, eventually, many other parts of the world.
Eugene and Ann also developed a deep love for Inverhuron. They worked with others in the community and throughout the world to gain a better understanding of the impact of nuclear power and how to mitigate the risks from it. Eugene worked tirelessly on environmental issues – not to obstruct, but to ensure that science and not politics guided us all along the path.
And that is the legacy of Eugene together with Ann – a philosophical one that was to help the community and to light our own paths. It is a legacy that will continue in the future.
Portrait and memorial available online at www.daveylinklaterfuneralhome.com.