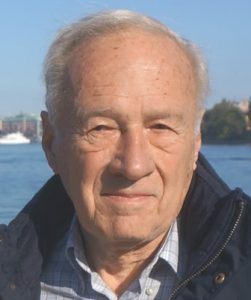 Douglas James Cudney died peacefully at Huron Shores Hospice in Tiverton on Monday, April 18, 2022, at age 89. His beloved partner Karen Breitbach was by his side.
He leaves his five children Robert, Leslie, Christopher, Janet and Gordon; his six grandchildren; and his nieces and nephews. He also leaves behind his cherished Jack Russell, Luke.
Doug was predeceased by his siblings Carole, Ross and Judy and granddaughter Tyler.
He was born in 1932 in East York, Ontario, to Edward Harris (Ted) and Jessie (née Davidson) Cudney of Winona, Ontario. Doug was the eldest of five Cudney siblings: Ross, Carole, Beverly and Judy. Niagara Foods, owned and operated by Doug’s parents, sent Doug to countries like Brazil, Israel, South Africa, Germany, France and the United Kingdom to source and market the products processed at the Stoney Creek, Ontario plant.
Doug was already an accomplished show-jumping talent when he moved to Mexico, at age 14, to train and compete in international show jumping. Doug and teammates Jim Elder and Tom Gayford were the first all-civilian show jumping team to win the United States Nations Cup in 1959. Fortunately, the three team members were reunited last month, more than 60 years after their historic win.
Doug became chef d’équipe when Canada went on to win Olympic gold in Mexico in 1968. Later, Doug became the first to begin importing international horses from Europe to Canada. Doug had many international horses, his favourite being the thoroughbred mare Diana Khan.
In his later life, Doug combined his horse and manufacturing experience with Karen’s background to successfully design, manufacture and market the Tipperary and Phoenix equestrian protective gear worldwide. He also became an avid thoroughbred racing enthusiast.
Doug’s irrepressible spirit and charisma will be missed by those who knew and loved him. Thank you to Doug’s wonderful neighbours in Kincardine and the caregivers at Huron Shores Hospice at Tiverton Park Manor.
Visitation was held at the Davey-Linklater Funeral Home in Kincardine on from 1-2:30 p.m. on Thursday, April 21, 2022, where the funeral service took place at 3 p.m. with Pastor Kenneth Craig officiating. A private family burial was conducted at Winona “The Fifty” Cemetery at 2 p.m. on Friday, April 22, 2022.
In lieu of flowers, memorial donations to Huron Shores Hospice would be appreciated.
Portrait and memorial available online at www.daveylinklaterfuneralhome.com.